The Primerdesign genesig Kit for Bacteria Hemorrhagic Septicemia (A.hydrophila) genomes is designed for the in vitro quantification of A.hydrophila genomes. The kit is designed to have the broadest detection profile possible whilst remaining specific to the A.hydrophila genome. The primers and probe sequences in this kit have 100% homology with a broad range of A. hydrophila sequences based on a comprehensive bioinformatics analysis. The primers have 100% homology with >95% of sequenced Aeromonas hydrophila isolates in the NCBI database. Due to the high sequence homology, the primers also have a high level of homology to other closely related Aeromonas sp. The primers therefore may also detect A. salmonicida, A. caviae and A. sobria.

Aeromonas hydrophila is a heterotrophic, gram-negative bacterium of the Aeromonadaceae family. This bacterium has a rod shape with rounded ends reaching 1-3μm in length. Polar flagella allow motility. 3 enterotoxins encoded by the 5Mbp genome are thought to be responsible for making this bacterium pathogenic. These entereotoxins are namely: cytotoxic (act);heat-labilecytotonic(alt)andheat-stablecytotonic(ast)ofwhichtheformeristhoughtto contribute most to toxicity. A. hydrophila can be considered as an opportunistic pathogen which is linked to infections in fish and amphibians as well as humans, but may not be the cause. Infection most usually occurs when an organism is dealing with environmental change. This could be a change in temperature or when infected with a different bacterium. In fish, the bacteria mainly infect the kidneys and liver resulting in disease that is thought to be the result of stress. In amphibians, the infection can cause internal heamorrhaging. Infection in humans can be caused by ingestion of infected food such as fish or meat. Once ingested the bacterium progresses to an organ via the bloodstream. Alternatively the bacterium can infect open wounds. The bacteria have pili which they utilise in attachment to host organism and invasion of the cells or organs. Colonisation occurs by asexual reproduction. Upon cell invasion, the enterotoxins are activated causing cell damage. Transmission in fish occurs when infected fish are moved into new fisheries without sanitation. The bacteria are largely antibiotic resistant, can survive refrigeration and are also able to grow at temperatures in a wide range up to 37°C. However, a sodium/calcium hypochlorite solution can kill this bacterium. Infection in fish may cause diseases including tail and fin rot, heamorrahagic septicemia and ulcer disease. In amphibians this bacterium is linked to a disease called red leg which is a result of internal heamorrhaging. Infection in humans can lead to a number of diseases including septicemia, meningitis, pneumonia and gastroenteritis. The bacteria can also infect open wounds causing cellulitis, myonecrosis and ecthyma gangrenosum. The latter two diseases occur more commonly in the immunocompromised, although infections do also occur in immunocompetent people.

The Primerdesign genesig Kit for Tilapia lake virus (TiLV) genomes is designed for the in vitro quantification of TiLV genomes. The kit is designed to have the broadest detection profile possible whilst remaining specific to the TiLV genome. The primers and probe sequences in this kit have 100% homology with a broad range of TiLV sequences based on a comprehensive bioinformatics analysis.

The Primerdesign genesig Kit for Epizootic haematopoietic necrosis virus (EHNV) genomes is designed for the in vitro quantification of EHNV genomes. The kit is designed to have the broadest detection profile possible whilst remaining specific to the EHNV genome. The primers and probe sequences in this kit have 100% homology with a broad range of EHNV sequences based on a comprehensive bioinformatics analysis. 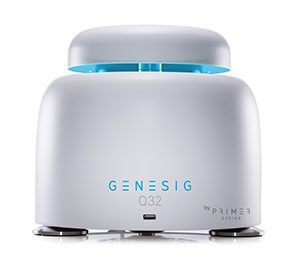